Not every project can be a walk in the park. Such was the case this week at our Ilima house. It started off with running water being heard but not located near the main valve. After searching for the leak and trying to locate the troublesome pipe, we opted for calling a plumber and rerouting the line with all new hardware and a temporary hose bib. We surmised that the leak was somewhere under the concrete driveway, which would mean cutting the driveway to find it. 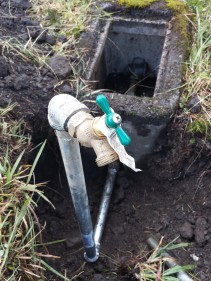 With the water problem fixed, we changed our focus a bit from the kitchen to the yard since our crew could put in the time. We are still working on our homework in researching cabinets and countertop material. More next week on the kitchen, we promise.

This week was devoted mostly to cleaning up the yard by cutting down trees, brush, and trimming the fruit trees (lemon and mango) and ornamentals (ti leaves, palms). We also rented a chipper for the week to eliminate the need to transport green waste and transform it into mulch. We no longer had the bin as it was picked up and hauled away after being filled with old lumber, toilets, tile, glass, and trash.

Once we got it on site, we discovered that we were not exactly clear on all the directions for the chipper. Trying to agree on what the service agent said when the chipper was running at full speed (and it was very loud) resulted in disagreements. The instructions given basically had to be interpreted by hand gestures and lip reading because we couldn’t hear a word the guy said. Not to worry, the manual was included. The answer was sure to be somewhere in the manual. Sure. The lesson here was: Make sure the machinery is in the “off” mode so you can hear the instructions.

Since it was raining, and not much work could be done safely in the rain with power tools or on the demolition of other parts of the house, it was decided that it would be better to call it a day and go back to the rental store to get a second round of instructions–this time without the chipper running. All we needed was to smoke out the neighbors because of a malfunctioning chipper or to have someone get hurt.

Ah, that was much better! After three days of rental, we were in business!

While it took a good portion of the week to just get through the general overgrowth, we were satisfied with the rough transformation of the yard.

There is still more to do with the overgrowth like removing the stumps and regrading, but the main portions of the property has been cleared. We found the pins to the property so we can tell where the boundaries are, and the yard looks much bigger than before.

Even though we had a rough start, the week ended well.

Ardith was previously a Special Education Teacher and School Administrator in the public school system. She has since successfully transitioned into the private sector in the construction industry where she can continue to help people. View more posts